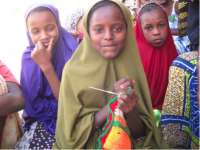 Azahara Mohamed is a student in the RAIN mentoring program in the nomadic community of Akokan, located in the remote northern area of Arlit. Azahara is from a very vulnerable family, whose mother is on her own in raising Azahara and her three brothers by cleaning homes in the city. Many of her girlfriends who were not in school influenced her to attend infrequently and fall behind in her studies when she first began in the mentoring program. Her mentor has counseled her in life issues and has taught her how to embroider sheets, a skill which she is now employing to sell sheets to local women, helping her mother to support their family.

Fatima Moussa is a nomadic girl identified by RAIN as having a high risk of dropping out of school, and was enrolled in the mentoring program. At first, Fatimawas a serious student, ranked fourth in her class. Suddenly, she stopped taking notes, was frequently absent and her grades began to fall. Her mentor, Mariama Moussa, asked her what was happening. Fatima disclosed that her parents were discouraging her from attending school, already earmarking her to marry. Her mentor talked with her parents about the importance of girls’ education and the consequences of early marriage. Fatima’s parents thanked Mariama for her work as a mentor and for raising their awareness. 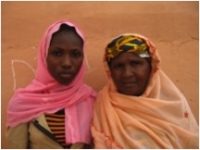 Fatima with her mentor Mariama

Now, Fatima is back to working hard in school, and for the 2011-2012 school year, ranked in the top five of her class, passing her examinations to proceed onto the next level.

Recently, a friend of Fatima who married very early had to undergo a surgical operation to survive her first delivery. Together with Fatima’s success in school, awareness has been raised on the part of the community about the consequences for young girls engaging in early marriage and pregnancy. In Akokan, more parents are now coming forward to assert that their daughters finish their studies before considering marriage.