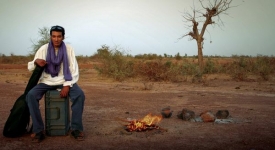 Portsmouth audiences will have the chance to see rising international music star Bombino and his group in a rare U.S. performance at The Music Hall to benefit RAIN! Soul of the Sahara will be the second time Bombino takes to the stage to raise funds and awareness for nomadic communities in West Africa.

Also on hand will be RAIN founder Bess Palmisciano and Ron Wyman – director of “AGADEZ – The Music and The Rebellion,” the documentary featuring Bombino.

Soul of the Sahara will be a special stop on the AGADEZ album world tour, which has received many accalodes, including being among NPR’s 50 Favorite Albums of 2011.

“His desert rock and roll guitar had the audience cheering. It is the new sound of Niger. Bombino brings a message of peace to the world and is an example of the spirit of changing guns for guitars.”  – Afropop Worldwide

With special thanks to Bombino and his group, Modiba Productions, Cumbancha Records, Ron Wyman and The Music Hall.

For more about Bombino, including song tracks, photos and vidoes visit: http://www.cumbancha.com/bombino.